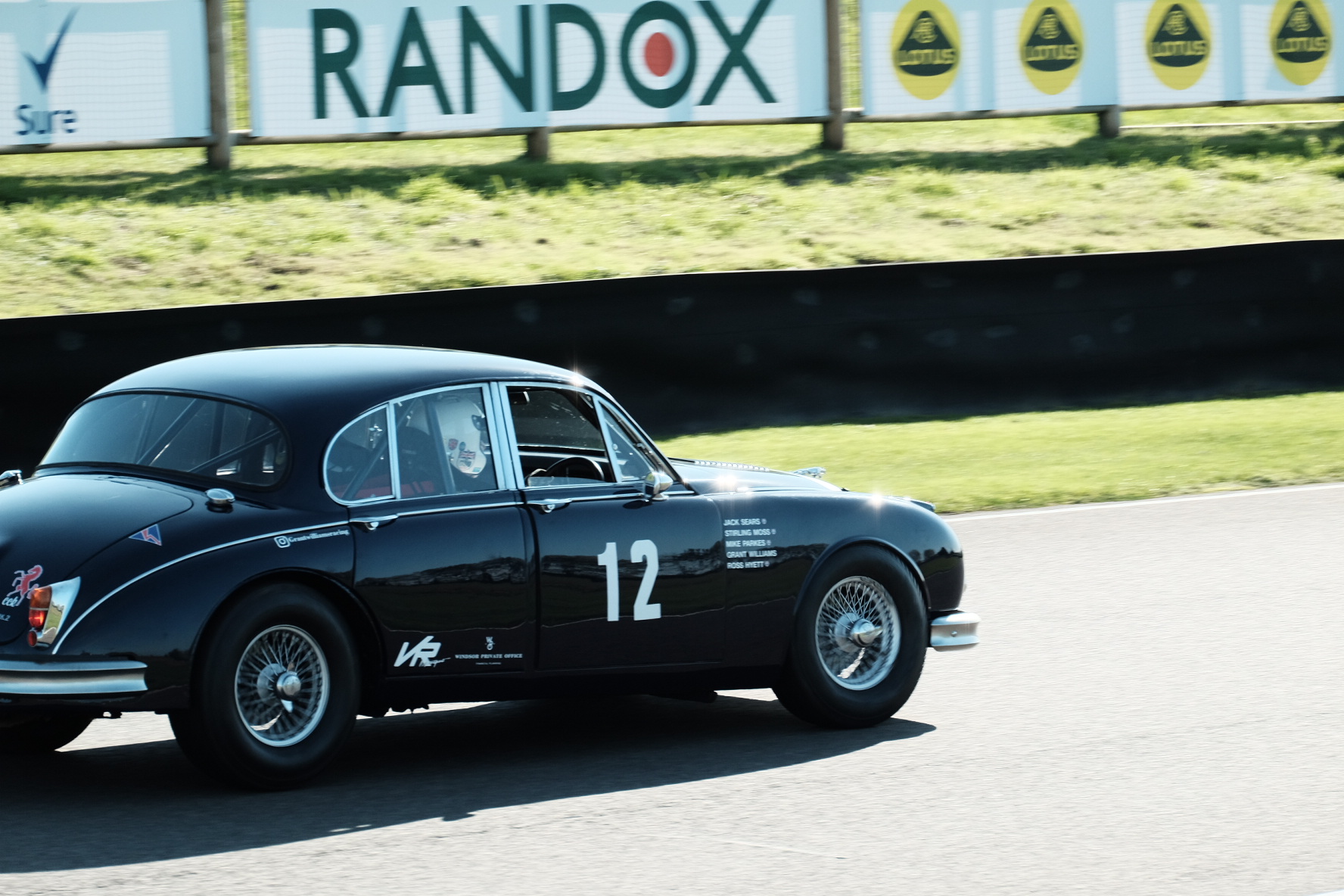 Our good friend Grant Williams was back in for some rolling road tuning. This time however, he brought the recently restored Jaguar Mk2 known as “JAG 400”. The car is an ex-competition car from the early 60s. It was driven in period by Jack Sears and was even tested at Silverstone by Stirling Moss.

We tuned the Jaguars triple SU carburettors to run with a straight through exhaust. At Goodwood cars are allowed to run without silencers. It is a real privilege to work on cars with such great history and then to see them raced hard on the track. Grant had some rear end trouble on Friday which was quickly dealt with. In Sundays race Grant finished 7th overall and 1st of the Jaguars. 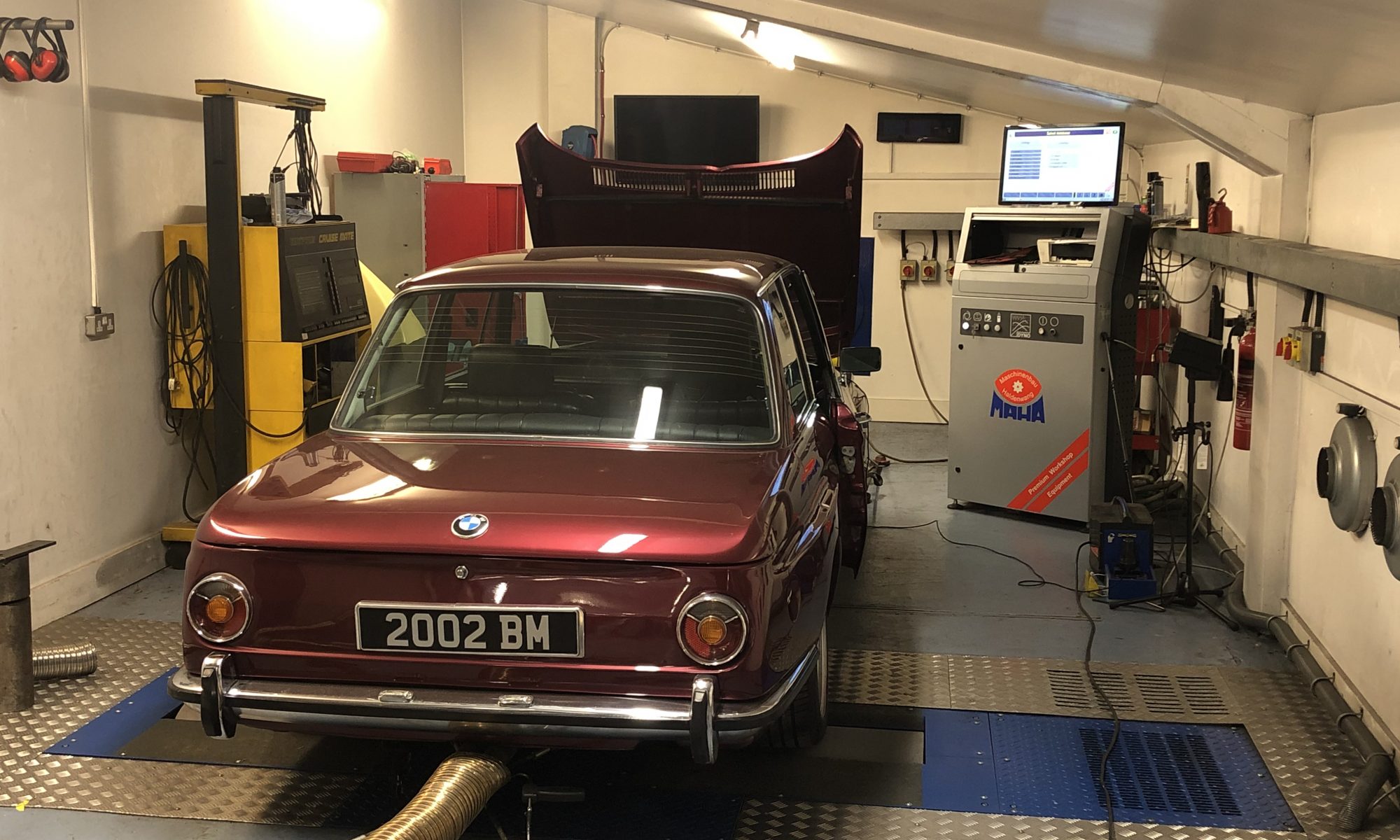 This BMW 2002tii, with its Kugelfischer fuel injection, came to us with running issues. Initially the owner wanted to do away with the injection system but we assured him that when working properly, the kugelfischer injection is excellent and will help maintain the value of his original BMW 2002tii.

With the car on the rolling road we were able to diagnose the symptoms that were causing the poor running. The engine was running very lean. Next, we systematically checked the systems settings to ensure everything was within adjustment and operating correctly. The system appeared to be ok so we tested the fuel pressure. Bingo. The fuel pressure was very low. We tested the fuel pump and it appeared to be fine so we turned our attention to the fuel regulator. It was faulty. So, we stripped it down and rebuilt it.

With the car back on the rolling road we could measure mixture from the BMW 2002tii fuel injection under load. The rebuilt fuel pressure regulator did the trick and the engine now had a decent air fuel ratio. 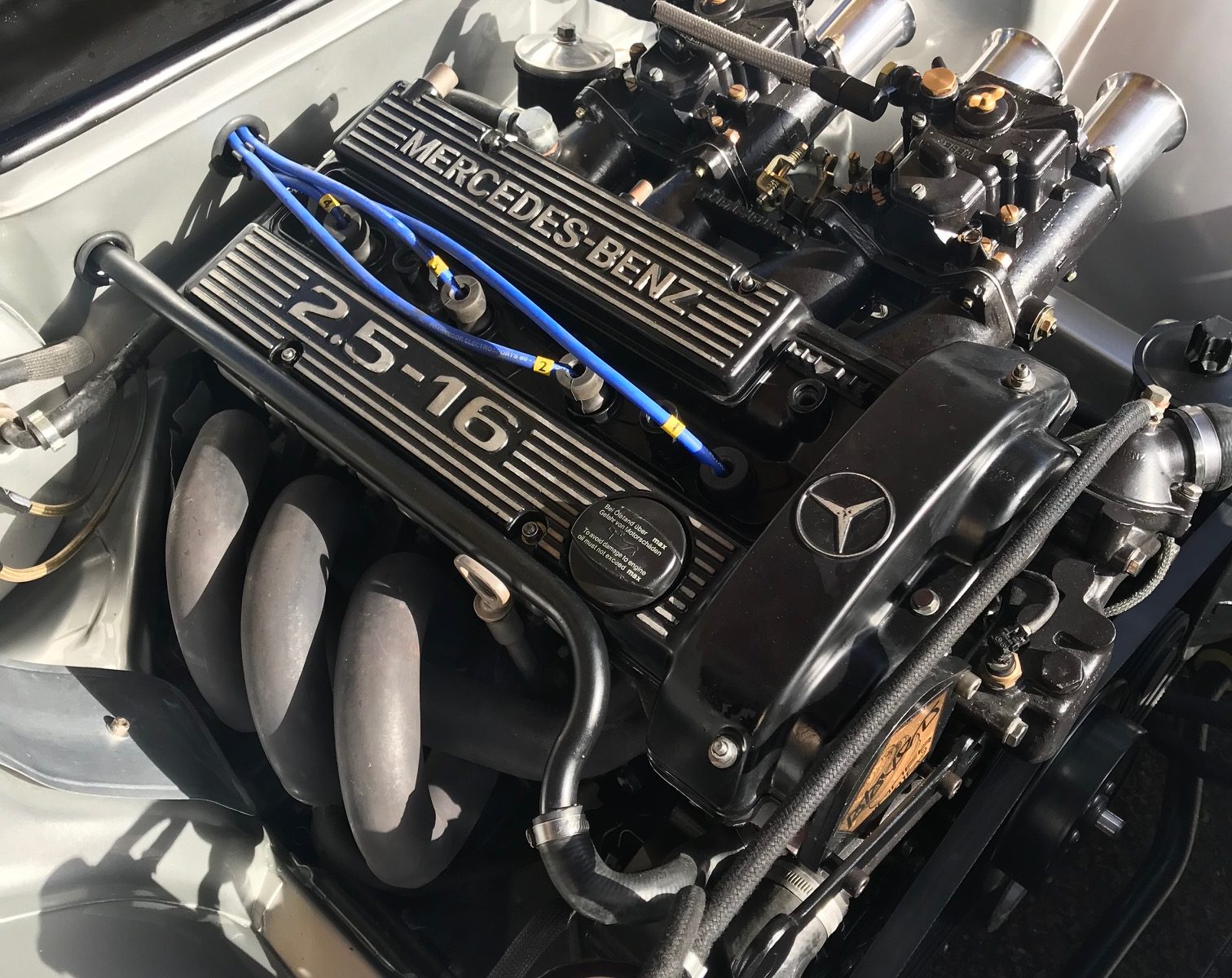 The Mercedes 190E Cosworth – a definitive modern classic and less common than a BMW E30. This one came in for a couple of jobs. Primarily, checking the cam timing and running it on the rolling road. It is a new engine and the owner wants to make sure everything is spot on before he begins running it in.

With new engines on the rolling road we limit the load and the RPM’s. It’s important to make sure the fuelling is ok with a new build. You don’t want to be running-in with a lean or rich fuel mixture.

Additionally, we took the car for an MOT and did a couple other little jobs. The owner is working toward a 2-week European road trip in May, taking in the Stelvio Pass and the Nurburgring. Can’t think of a better trip to do in a Mercedes 190E Cosworth. 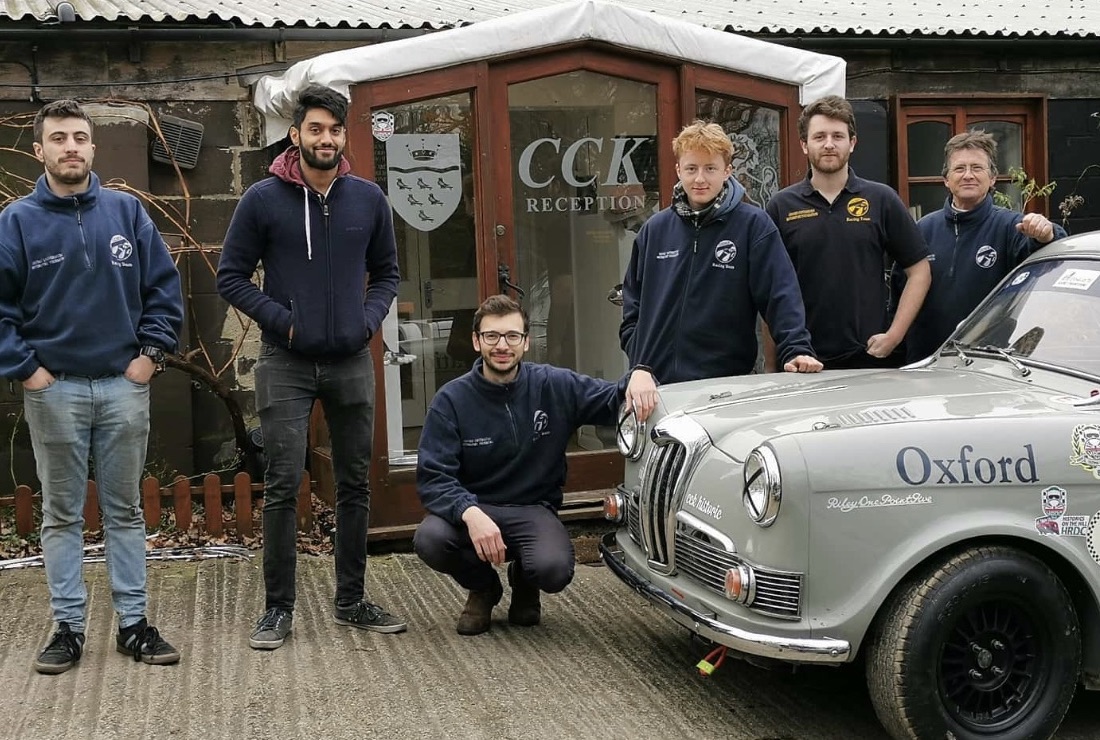 This week we had the pleasure of inviting the Oxford Universities Motorsport Foundation (OUMF) to test and tune their racing Riley 1.5 on the rolling road. Ding Boston and his crew of students were here bright and early Saturday morning with the car and a selection components they wanted to test.

First, we established a baseline. We made sure the fuelling was adequate and did a power run. This data was saved on the computer so we could compare the torque and power curves as we worked through the day. Baseline power peaked at 155.3bhp. Next, we advanced the ignition timing to see how the engine reacted. Power dropped to 151.2bhp so we set the timing back to where it was.

Next, we tried a new inlet manifold and short trumpets on the Weber DCOE carburettor. This time the power jumped up to 160.2bhp. Great result. Torque was down to 141.7lbft so we tried some long trumpets. Power was virtually the same at 160bhp dead but the torque came up to 143.7. Lastly we ran the car on an open exhaust. We adjusted the jetting in the Weber carburettor to compensate and it made the best power of the day at 162.2bhp and 144.7lbft of torque.

A day well spent and a Riley 1.5 rolling road tuned to peak performance. 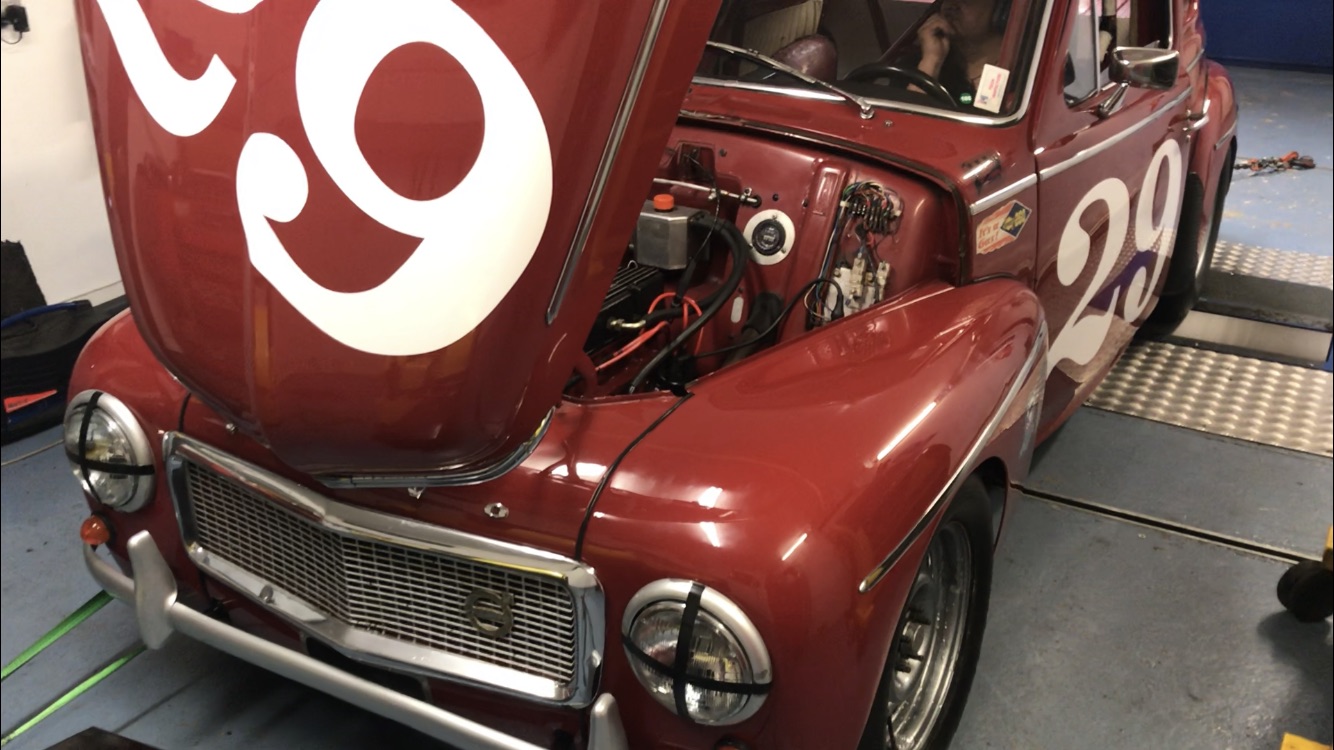 Development of our 1958 Volvo PV544 for Goodwood has continued following a successful test at Brands Hatch. We spent some significant time on the rolling road and tried out some different things. Ultimately we have gone up on the choke size, changed the emulsion tubes and re-jetted the carburettors and found an incredible 21bhp (flywheel) with an increase in torque across the whole curve. We’ve got some suspension changes to make this week before heading back out on track for our second test.